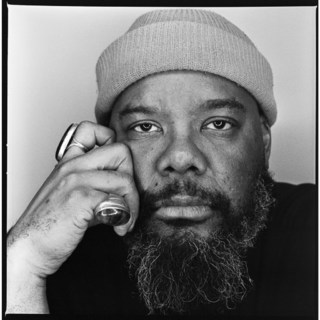 Artist. Producer.Educator I Connector of dots... Preeminent Improvisational Vocalist, GRAMMY-nominated musician, Creative DSGN for projects with Grammy-nominated artist Goldink and artist/musician Guillermo Brown (James Corden Show). He can be heard on Whose Hat is This? Everything's Ok, Goldlink's At What Cost, MTV's Rebel Music, Kevin Hart's Laugh At My Pain, A'Larrache (Canal +), I Ain't Scared of You: a Tribute to Bernie Mac and over 60 records spanning: Jazz, Hip Hop, Rock and R&B. As a performer Kokayi continues to ignite stages and captivate audiences with a sound that resonates between gospel and gritty, at a recent performance in Lisbon Avant Music News stated "Rapper Kokayi's range and majestic voice resonated with the depth and scope of experience." Kokayi's performances have garnered him a reputation as not only a solid songwriter but also a seasoned veteran of the stage, with an innate ability to seamlessly transition from Hip Hop, Jazz, Punk and, Electronica to unite audiences of any age range with a variety of musical tastes. Kokayi's latest projects, living while black...an ep and HUBR1$ both explore the ideas of race and humanity through various lenses. HUBR1$ is a mixed media portrait on the experience of black masculinity mediated through the lens of the story of Icarus and Daedalus. At its nexus, the work is an amalgamation of themes that directly confront; the prison industrial complex, escapism, recidivism, depression, suicide, death and reincarnation. The work also examines society's obsession with mediocrity, its relationship to celebrity, the era of shame and the way in which black men are asked to dream, presented as both performance art paired with portraiture and a live music experience to provide an immersive foray into the visceral experience of the Greek myth reimagined. Kokayi then turns from fable to stark reality with the 6 song living while black ep to examine navigating society via the lens of black life, its; joy, ptsd, genetic memory, and the unending necessity to prepare to exist as the "other". With living while black...an ep, Kokayi returns to raw lyricism and imagery to paint the black experience as it stands in this current decade. Kokayi has been faculty at the School of Improvisational Music teaching vocal improvisation as it relates to Jazz and Hip Hop, collaborator with international arts program OneBeat and a freelance music emissary with the U.S. State Department. He is Chief Ideator and co-curator of BeatsnBeans: a discussion series on creativity, coffee culture and the re-imagining of creative spaces. He is a Halcyon Fellow, DCCAH Artist Fellowship and Sister Cities grant recipient and has served as Artist in Residence for Music Meeting in Nijmegen, NL. Kokayi considers himself an emcee and performer first, no matter the medium, he allows his love for the lexicon of artistic language to control the narrative of creating and his love for the catharsis of performance to captivate his audiences across the globe. Kokayi continues musical work with Ambrose Akinmusire, Teri Lynne Carrington + Social Science, Whose Hat is This?, Ego Mondo, and MacArthur recipients Dafnis Prieto and Steve Coleman, respectively. He has been a TEDxWDC presenter, speaking on "collaboration and the creative economy," and has taught university-level classes on vocal improvisation at Monash (Melbourne, AU), Universidade Lusiada (Lisbon, PT), Stanford, Carnegie Mellon, NYU, and San Francisco State. He has performed in over 42 countries utilizing hip hop culture as a tool for diplomacy, education, and catalyst in fostering cultural exchange. "My work is an amalgamation of my life experiences as filtered through; DC, Go-go and the music begat from the African diaspora: