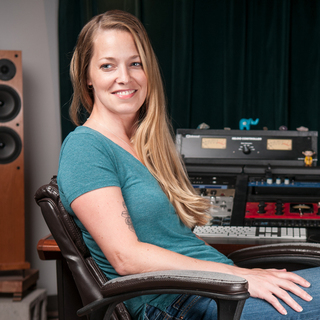 Kim Rosen is a GRAMMY® nominated mastering engineer who works out of her own “Knack Mastering” located in Ringwood, NJ, USA. Kim grew up in the western Massachusetts town of Northampton. Realizing early-on that music was a driving force in her life, Kim poured herself into the local music scene while searching out a way to carve a path for herself. In the summer of 2002 a friend turned her on to a mastering studio in NJ that was looking for an intern. Kim jumped at the opportunity, moved to NJ and began her journey at the age of twenty two. After a couple of years in production, training and assisting in sessions, Kim was given the opportunity to take on her own mastering projects. Over the next five years, Kim would rack up hundreds of mastering credits including notable projects from Jeremy Enigk, Franz Ferdinand and Dashboard Confessional. In 2009 Kim decided to go out on her own. She built her new studio with the help of renowned acoustician Chris Pelonis. The mastering room at Knack is a world-class listening environment, with analog and digital gear carefully chosen for its sound quality as well as its versatility. Kim now has a growing client list that includes producers and engineers such as Ryan Freeland, Joe Henry, Matt Ross-Spang, Paul Q. Kolderie and independent and major label artists from around the world. Kim has served as a Governor for the New York Chapter of the Recording Academy since 2018 and has been a featured panelist and speaker at audio conventions such as AES in New York City, Winter NAMM in Anaheim, CA and Summer NAMM in Nashville, TN as well as at colleges and universities across the United States. In 2019 Kim and her tech/husband Dave launched Whitestone Audio Instruments. Their P331 Tube Loading Amplifier, originally designed as a custom piece of gear for Kim’s mastering room, is now being put to work in some of the world’s most successful tracking, mix and mastering studios. Kim’s mastered seven Grammy® nominated recordings. One winning in the Best Folk Album category as well as two nominations in the Best Engineered Album/Non-Classical category: 2016 Nomination Best Blues Album, Bettye Lavette, “Worthy” 2017 Nomination Best Engineered Album Non-Classical, Bonnie Raitt, “Dig In Deep” 2018 WIN Best Folk Album, Aimee Mann, “Mental Illness” 2019 Nomination Best Engineered Album Non-Classical, The Milk Carton Kids, “All The Things That I Did And All The Things That I Didn’t Do” 2019 Nomination Best Contemporary Blues Album, Teresa James And The Rhythm Tramps, “Here In Babylon” 2019 Nomination Best Contemporary Blues Album, Victor Wainwright, “Victor Wainwright and The Train“ 2020 Nomination Best American Roots Performance, Rhiannon Giddens, “I’m On My Way“ Other recent credits include a diverse spectrum of genres with artists such as Wynonna Judd, Belly, Bonnie Raitt, Billy Bragg, Joe Henry, Steep Canyon Rangers, Glen Phillips, Aimee Mann, The Milk Carton Kids, The Barr Brothers, Superdrag, Title Fight and Anthony Green. She was fortunate enough to master the remake of the Johnny Cash album “Bitter Tears” for Sony Masterworks which features artists such as Emmylou Harris, Steve Earl, Kris Kristofferson, Gillian Welch and The Milk Carton Kids as well as the beautiful Rhiannon Giddens and Iron & Wine rendition of “Forever Young” for the final episode of NBC’s television series “Parenthood”. Kim continues to build a client base of artists, producers, labels and engineers who trust her ears, her experience and, above all, her respect for their mixes.